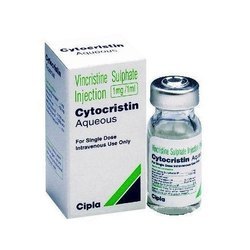 Cipla Cytocristin Injection is used for treatment of Hodgkin's disease, neuroblastoma, and acute myeloid leukemia. It is a chemotherapy medication which is administered intravenously showing about 44% of protein binding ability. This injection is metabolized in liver with help of CYP3A4 & CYP3A5 and has average elimination half life of about 85 hours. It interferes with normal cell division which causes tumor cell death. Cipla Cytocristin Injection has vincristine sulphate as an active chemical which binds to tubulin protein after administration. It has also shown to inhibit production & maturation of leukocytes.

NEXT GEN BIOTECH
<< Back
X